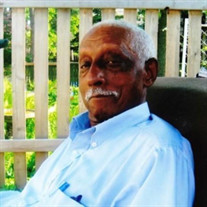 Sunrise….December 31, 1925 Sunset......December 27, 2021 John Stewart was born on December 31, 1925, in Itta Bena, Mississippi. He grew up on the westside of Chicago, IL and attended John Marshall High School there. In 1947, John married Claudyne Jones. John entered the U.S. Navy in 1943, and he was stationed in Pearl Harbor soon after the bombing. He was ordinance personnel and a Shore Patrol policeman during his Navy tenure. He worked a variety of jobs in Chicago after military discharge. John loved the LORD, attending church in the Chicagoland area. He joined Pilgrim Baptist Church after moving to Minnesota. When John spoke with family and friends, his heart overflowed with joy, love and treasured moments. John loved jazz music so much that he traveled with friends & family, met friends or went by himself to see jazz performances throughout Chicago, Illinois, Wisconsin and Minnesota. He introduced family and friends to jazz that they came to love, too. He enjoyed live performances and with his enthusiastic joy, artists were drawn to come say hello to the man dancing in his seat. John’s special passion was girls and women’s basketball at all levels. He attended every Marshall High School Girls Basketball game he could until moving to MN. In 2010, based upon Marshall Girls Basketball Coach Dorothy Gaters’ nomination – she is the winningest coach Illinois High School history - John was inducted into the Chicago Public League Basketball Coaches Hall of Fame as a Friend of Marshall High School Basketball. He loved college and professional basketball as well, following the young ladies he saw play in Chicago as they advanced to the next levels of the sport. In college basketball, the Lady Volunteers of University of Tennessee took his heart. His day was “wonderfully good” as he would say when his grandson Marques surprised him with a visit to the Women’s Basketball Hall of Fame in Nashville, TN where his two favorite coaches were enshrined – Marshall Coach Dorothy Gaters and University of TN Women’s Basketball Coach Pat Summit. John is preceded in going home by his parents Elease & Jack Dunlap; John’s wife, Claudyne; Sister Martha Ruth Pierce and his niece, Marilyn Hebron. He leaves in our presence his son, Jon Sebastian Stewart and Jon’s wife Andrea Hayden (MN); Daughter Aria Marie Adams (IL); Grandsons Marques Stewart (MO) & Desmund Adams (IA) and their wives, respectively, Amy (MO) & Shondalette (IA); great-grandchildren Hope & Micah (MO) and Khalil & Solomon (IA); nephew Dwayne Wynn & his wife Francis (FL); greatnephew Christopher Hebron & his wife Kawanna & their two daughters Nia & Cara (IL); and nephew-in-law Donald Hebron (Christopher’s Dad) (IL).

The family of John Stewart created this Life Tributes page to make it easy to share your memories.

Send flowers to the Stewart family.