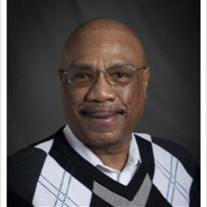 Mr. Woodrow Benford, Jr., affectionately known as “Woody”, was born to Woodrow, Sr. and Annie Bell Benford in East St. Louis. Mr. Benford was the second oldest of 8 siblings: Ruby, Michael, Ronald, Darrell, Cynthia, and twins Anita and Annette (twin). Woodrow, Sr. and the lovely Annie Bell relocated to Omaha, Nebraska, where in 1962, Woody attended Omaha North High School. Mr. Benford was an active member of the ROTC (Reserve Officers Training Corps), a 4-year honors student, and worked in principal Harold Reeves’ office. Woody graduated from Omaha North in 1966, with an academic scholarship to the University of Illinois at Champaign-Urbana. At the age of 18, in his sophomore year of college, Mr. Benford was drafted into the United States Army. He was stationed at Fort Lewis in the state of Washington. Woody was eventually stationed in Germany, where he spent time in Nuremberg, Munich, Frankfurt, and Bamberg. After serving three years in the United States Army, Woody returned to Omaha and enrolled in the University of Nebraska-Omaha’s Electrical Engineering program. Mr. Benford had a change of heart, and decided he wanted to do what he could to help improve local conditions. “I thought Public Administration was the way to go. After my experiences in Germany and with what was happening back in my hometown, I decided to do whatever I could to improve the conditions for the folks in my community. I felt if I could get into local or state government on some level, I would be able to assist my community and improve their conditions. I thought Public Administration was the way to go.” Woody graduated from the University of Omaha in 1974, with a Bachelor of Science in Business Administration along with other accomplishments to include being President of the Black Student Organization, a student representative on the university’s chancellor selection committee, and participant in the civil rights movement of the time. One of Woody’s fondest moments was helping to establish a study center on one of the main thoroughfares of North Omaha. The study center was a black library with a collection of black authors, history books, maps, and charts reflective of black communities in other parts of the country. Anyone who knows Woody can appreciate his fondness for politics. During the late 70’s and 80’s, the political climate was very different. The Republican party was a much different type of political movement back then. Mr. Benford was a registered Republican and an active participant in the Douglas County Republican Party. He was inspired by the likes of John Y. McCollister, Member of the U.S. House of Representatives from Nebraska’s 2nd district, and Mr. Harold Daub, who at the time was Chairman of the Douglas County Republican Party. Mr. Benford was also active in the local Veterans of Foreign Wars (VFW) and the American Legion. Although he wasn’t a veteran of a foreign war, he was invited by some friends to attend a meeting with Vietnam war veterans from VFW Post #1, the largest one in the city at the time. During the meeting, there was a desire to reactivate VFW Post #1364, a predominantly black VFW Post in Omaha that was defunct. Although he wasn’t a veteran of foreign wars, Woody was encouraged to become a member of the organization on account of his desire to help. The group accomplished the task of reorganizing and reactivating VFW Post #1364. One of Mr. Benford’s cherished professional achievements was the formation of Omaha Builders, a construction company. The Omaha Builders were contracted by the city of Omaha, to build a city park, repair sidewalks, driveway approaches, and home renovations. Woody also enjoyed work as a mortgage loan officer several years later. His experience with Commercial Savings and Loan in Omaha, afforded Woody an opportunity to work at US Bank in St. Paul, MN. During this period of his life, he enjoyed living in the Galtier Plaza with its added convenience of being able to walk the skyway to and from work. Woody loved the outdoors. He was an avid fisherman and loved camping. Mr. Benford enjoyed cooking, reading, westerns, watching movies, playing chess, political debate, and being a charitable contributor in his local community. Woody is preceded in death by his father Woodrow, Sr., mother Annie Bell, sisters Ruby, Anita, Annette, and brother Michael; He is survived by his sons Samori and Rashad; his sister Cynthia, brothers Ronald and Darrell; grandchildren, nieces, nephews, cousins, and other relatives.

The family of Woodrow Benford Jr created this Life Tributes page to make it easy to share your memories.

Send flowers to the Benford family.