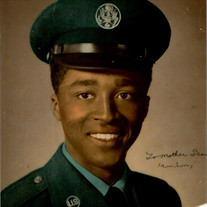 Merrill, Willard John Jr. December 11, 1934 - Sept. 13, 2020 Willard was born December 11, 1934, the 3'd of 10 children born to the Rev. Willard John Merrill Sr. and Hazel Merrill. Willard accepted the Lord at an early age and was baptized at Bethesda Baptist Church. While at Bethesda he served on the Usher Board. Willard attended Whittier and Clinton Elementary Schools, Phillips Jr. High School, Central High School and graduated from Vocational High SchooJ. Upon graduation he enlisted in the Air Force and was stationed in Thule, Greenland. While in Thule, Greenland he was permanently disabled and suffered his entire adult life with these injuries. Willard was honorably discharged from the Air Force on January 6, 1956. As a teenager Willard had a paper route twice a day and on Sunday, he was a golden gloves boxer at Phy his Wheatley house coached by Harry W. Davis Sr. Willard loved music, especially jazz. He played the piano and loved to dance. Willard was very protective of his 8 sisters and 1 younger brother and let it be known in the neighborhood not to mess with his siblings. Willard was a fun loving and generous person and will be remembered as a wonderful and giving brother and uncle with that wonderful smile and perfect teeth. Willard passed away and went to be with the Lord on September 13, 2020 at 12 noon at Providence Place in Minneapolis. Willard was preceded in death by his parents Rev Willard John Merrill Sr. and Hazel S. Merrill, his sisters Barbara Fischer, Kathleen Carr and Evelyn Merrill and brother Ronald Merrill. Willard John Merrill Jr. leaves to cherish his memory sisters Adrienne Ratliff, Winna Davis, Evangelist Janice Moore, Judith Merrill and Mary Merrill and a host of nieces and nephews, great nieces and great nephews, great great nieces and great great nephews and a host of cousins and friends. Funeral Service October 7th, 10 AM visitation, 11 AM funeral, at Bethesda Baptist Church, 1118 South 8th St, Mpls, MN 55404.

The family of Willard John Merrill Jr created this Life Tributes page to make it easy to share your memories.

Send flowers to the Merrill family.