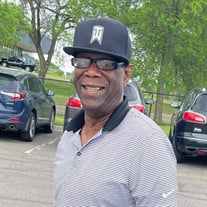 Ronald (Ron) DuBois Johnson passed away with family by his side Thursday January 20, 2022, in Bloomington, MN after a battle with bladder cancer. Known by his family and childhood friends as Bubble, Ron was born in Trenton, NJ on June 13, 1955. He was raised on the city’s west side by his Mother Mable Johnson and Father Robert “Speedy” Johnson. As a kid Ron went fishing with his Dad, played baseball and soccer, took karate lessons and enjoyed swimming in the canal behind the family’s house. In his teenage years Ron worked construction with his Uncle Johnny. Ron graduated from Notre Dame High School in 1973. Following high school Ron served a brief stint in the Army before being Honorably Discharged due to a medical condition. Ron began his professional career with Sherwin Williams. Ron eventually moved to Pennsylvania in the early 1980s. In 1991 Ron moved to Minnesota, eventually settling in St. Paul where he remained for the rest of his life. For the last several years of his life Ron worked in the employment field, most recently as an Employment Specialist for LifeTrack. Other than Ron’s family, golf became his life’s love. He played from the time the ground thawed in the spring until the first snow fall. He would play all day and into the night. Ron would often show up to the course with a new gadget to show off to his golf buddies. He even created a makeshift driving range and putting green in his basement. Everything was hobby for Ron. He continued to fish throughout his life. For a time, he owned a speed boat that he used to fish in the Delaware River and Atlantic Ocean. There was a time in Ron’s life when he considered himself a serious horseback rider. For a short period of time Ron was into archery. He bought a CB radio and went by the handle “The Black Rider” while driving around in his silver Thunderbird. Ron got involved in the music industry as a producer, manager and promoter. He also began producing and acting in local movies. Ron joins his sister Robin Ward (Johnson) and Father Robert Johnson in eternity. Ron is survived by his mother Mable Johnson; children, Tammy Johnson Chapman, Ronnie Johnson and Frances Johnson; grandchildren, Campbell Johnson, Maximus Chapman and Irie Johnson; daughter-in-law Nikki Johnson, son-in-law Robert Chapman, sister Roxanne Tossie, brother Robert “Chucky” Johnson, brother-in-law John Tossie and special family members, Rosemary Ball, Jeremy Majeski, Tony Kaczoroski, Teddy Ball and Zac Cruzen. He was Uncle Bubble to Nikki Ward Mosgrove, LaShaunna Ward Love, Rickey Boone, Steven Tossie, Mark Tossie, Cynthea Tossie and Airyon Weeks. Ron had a number of cousins, great-nieces and great-nephews. There was never a person Ron was not willing to talk to. If you ever spent any time with Ron, he considered you a friend. Many of these friends held a special place in his heart and showed their support until the very end. A Celebration of Life service will be held on Saturday February 12, 2022 between 11:00am-1:00pm at Estes Funeral Chapel 2201 Plymouth Ave N, Minneapolis 55411. A gathering with food, celebration and remembrance for family and friends will follow at Ron, Nikki, Campbell & Irie’s house. In lieu of flowers, bake goods and gifts the family asks you consider making a charitable donation in Ron’s name to https://www.goodwilleasterseals.org/donate/giving/financial-donation-goodwill Designation: Father project or https://bcan.org/get-involved/ways-to-give/donate/

Ronald (Ron) DuBois Johnson passed away with family by his side Thursday January 20, 2022, in Bloomington, MN after a battle with bladder cancer. Known by his family and childhood friends as Bubble, Ron was born in Trenton, NJ on June 13, 1955.... View Obituary & Service Information

The family of Ronald Dubois Johnson created this Life Tributes page to make it easy to share your memories.

Ronald (Ron) DuBois Johnson passed away with family by his side...

Send flowers to the Johnson family.