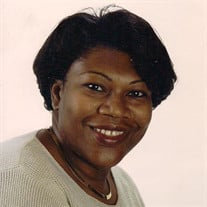 Mattie R. Roberson Sunrise May 31, 1960 | Sunset January 2, 2019 As we come together to celebrate the life of Mattie R. Roberson she wanted to be remembered for her dedication and strength as a cancer survivor for many years. She would love to be here with us in the flesh but our memories of her will always remain. Mattie was born in Charleston, MS on May 31, 1960. She moved to the Twin Cities with her family when she was four years old. She demonstrated keen intelligence at an early age, learning to clean, cook, and sew. It was clear that she was ahead of her time. She attended public schools in North Minneapolis and went on to further her education earning an associate degree. Mattie always felt the educational experience should be more fulfilling. She wanted to make a difference in life and leave a legacy for generations to come. Encouraged by her son. Amandilo II, Mattie developed a passion for real estate and obtained her license as a Real Estate broker. She was quick to share her knowledge with family, friends and even strangers. She was the go-to person for any challenging real estate questions and she was able to help family, friends and herself, obtain property. To supplement her real estate dealings, Mattie started her own cleaning service called Personal Touch Housekeeping. Her slogan was, “We clean your house the way you would, with a personal touch.” She employed several family members and friends and encouraged others to start businesses of their own. Her greatest legacy is her four children: Aqueelah, Amandilo II, Yasiman and Amin. She devoted herself to them with the goal of raising good citizens that love God and are well educated in the realities of life. She was stern but loving, and all four have reached adulthood having fulfilled her three objectives. Mattie also loved to travel. She didn’t care if it was by car, bus, train or plane. She took her children on many road trips and continued the tradition throughout their lives. She travelled back to Mississippi a number of times to reconnect with her roots. She also made stops in Detroit, St. Louis, Memphis, Atlanta, Phoenix, Las Vegas and Los Angeles just to name a few. She obtained her passport for a planned trip to Europe and Africa, but time ran out before she could fulfill her dream. Overall, Mattie’s strong dedication came from her grandchildren who she loved dearly. She was determined to not only be strong for herself but for them as well. Far or near, hearing their voices or being present with them would brighten her day with their big smiles. She loved just to hear them say Granny. Mattie had a heart attack in 2012 and was diagnosed with breast cancer in January of 2013. Not long after her diagnosis she moved to Rochester, MN to seek treatment at the Mayo Clinic under the care of Dr. Prema Peethambaram who she came to trust and respect. She was not given long to live but beat the odds for several years before succumbing to the disease. Mattie passed away peacefully in her sleep at her home in Rochester, MN on January 2, 2019. She is preceded in death by maternal grandparents: Gordon Roberson and Adell Hollman (Watt) and paternal grandparents: Spencer Lyons and Mattie (Barksdale). She leaves behind to celebrate her life mother: Geneva Roberson (Stepfather: Ben Dye) of Mpls, MN, father: Spencer Lyons (Step mom: Theresa Lyons) of Detroit, MI, Lifelong friend and co-parent: Amandilo Cuzan, Chicago, IL, their four children: Aqueelah Worthen (Calvin Worthen) of Chandler AZ, Amandilo Cousin II, Los Angeles, CA. Yasiman Roberson (Marvin Allen) and Amin Amos Mpls, MN She was lovingly called Granny by her seven grandchildren: Calvin Worthen, Renajah Smith, Callie Worthen, Caleia Worthen, Ajazanay Allen, Amari Allen and Alannah Allen. Seven brothers: Donald Lyons, Christopher Lyons, Darrell Lyons, Byron Lyons, Spencer Lyons IV, Aryce Crowder all from Detroit, MI and Mandel Dye (Nikki Dye) of Mpls, MN. and numerous other extended family and close friends.

Mattie R. Roberson Sunrise May 31, 1960 | Sunset January 2, 2019 As we come together to celebrate the life of Mattie R. Roberson she wanted to be remembered for her dedication and strength as a cancer survivor for many years. She would... View Obituary & Service Information

The family of Mattie Roberson created this Life Tributes page to make it easy to share your memories.

Send flowers to the Roberson family.