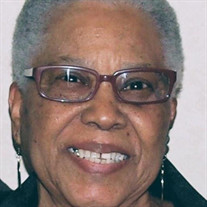 Mother Lucy M. Westbrook Mother Lucy Maud Westbrook was born on December 1, 1934, in Arkadelphia, Arkansas the daughter of Christine Birl and Leonard Harris; she was raised by Jefferson and Sadie Williams. She received a Bachelor of Science Degree in Health and Physical Education and Natural Sciences from the University of Arkansas, Pine Bluff, Arkansas in 1955. On July 24, 1955, she married Wendell T. Westbrook and they moved to Minneapolis, Minnesota. She was a stay-at-home mom for the first ten years and then entered the job market as a substitute teacher and later as a fulltime Physical Education teacher in the Minneapolis public school system. She later went on to work at the Minneapolis Urban League as an Employment Counselor where she motivated and influenced people to learn new skills that would allow them to begin and or advance their careers. She worked at the Urban League until she retired. Mom and Dad joined the First Church of God in Christ where Mom served faithfully for over 65 years. Mother Westbrook served in a multitude of positions on the local and state levels. She was the Deacon Wives Circle president for a number of years where she trained deacon wives on how to serve in the ministry with their husbands. She was also active in Bible Band, Sunday School, Young People Willing Workers (YPWW), the building fund and whatever else her hands found to do. She especially enjoyed serving as the treasurer in women’s department and assisting with the planning of the annual “Women’s Retreat” that took place for 20 consecutive years. She was the assistant Church Mother and often spoke words of encouragement to people from all walks of life, she welcomed everyone into the church without any stipulations. It was her desire to see people better themselves and to follow their dreams but most of all to seek the Lord with all of their hearts. Mom was a fashionista and was known for her church attire: stylish suits, along with matching shoes and handbags. She enjoyed reading, working all types of puzzles, bowling, golf, gardening, bird watching, adult coloring and traveling. Her most recent trip was last summer to St. Louis, Missouri to attend a family gathering where four generations were represented. She was a wonderful mother and leaves to cherish her memories; two sons and one daughter, Jeffrey (Janie) of Minneapolis, MN, Gregory (D’Andrea) of Brooklyn Park, MN; and Wenetta Turner (Lindsey) of Cincinnati, OH. She was an only child, but she will be fondly remembered by sister-in laws and brother-in-law: Adell Westbrook of Flint, MI; Ira Watkins of Monticello, AR and Charlotte Watkins Jacobs (Freddy) of Little Rock, AR. Seven grandchildren: T’Nina Westbrook, Jarret Westbrook, Gregory Westbrook Jr., J’Nae Westbrook, Delainey Turner, Micah Turner and Alivia Turner. Three great-grandchildren: Kai Westbrook, Sarai Westbrook and Messiah Patton She also leaves behind four nieces, Dawna Lacy (Solomon), Marsha, Felicia Brown (Ramone) and Kim Williams (Reginald) and one nephew, KenYon Jacobs (Rita). Godchildren: Melinda Montgomery, Paul Jerome Montgomery, Timothy Montgomery (Rachel) and Cecilia Peoples. She loved people, and leaves behind a host of other family, church and community friends. Mother Westbrook is preceded in death by her parents; her husband, Deacon Wendell T. Westbrook; her son, Gary D. Westbrook; brothers-in-laws, Dr. Franklin Westbrook and Dr Willard Watkins and her nephew Franklin Westbrook, Jr.

Mother Lucy M. Westbrook Mother Lucy Maud Westbrook was born on December 1, 1934, in Arkadelphia, Arkansas the daughter of Christine Birl and Leonard Harris; she was raised by Jefferson and Sadie Williams. She received a Bachelor of Science... View Obituary & Service Information

The family of Lucy Maud Westbrook created this Life Tributes page to make it easy to share your memories.

Send flowers to the Westbrook family.