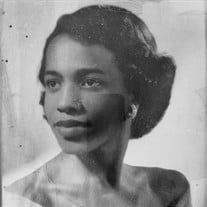 Dr. Ida-Lorraine Jules Wilderson peacefully passed away on Friday, January 25, 2019 in her Minneapolis, Minnesota home. Born February 10, 1932 in New Orleans, Louisiana, Ida-Lorraine was 86 years old. Predeceased by her parents Emily and Henry E. Jules, Sr., and her five siblings, Adrienne Jules Young, Linda Jules Adams, Inez Jules Davis, Henry E. Jules, Jr., and Weldon James Jules. Ida-Lorraine is survived by her loving husband of 63 years, Dr. Frank Benjamin Wilderson, Jr. She is also survived by her son, Frank Benjamin Wilderson, III (62), daughter, Fawn Elizabeth Wilderson (61), daughter, Amy Althea Cousin (56, son-in-law Tyrone Cousin ), and son, Wayne Henry Wilderson (53), six grandchildren Reba Wilderson, Maarya Cousin, Shaa’ya Cousin, Ijaaz Cousin, Manaal Cousin, and Esau Cousin, and also great-granddaughters Bontle Wilderson, and Violet Ruby Johnson, as well as many relatives and friends. Having graduated from Xavier University Preparatory School (now known as St. Katharine Drexel Preparatory School), she attended Xavier University in New Orleans, taught 4 years in the Orleans Parish Public Schools, then went on to study at the University of Chicago. After that, she obtained her Masters Degree in Child Development from the University Of Michigan. Then to the University of California, Berkeley. After that, she went on to receive her PhD in Educational Psychology from the University of Minnesota. She and Frank and their three young children Frank (“Frankie”), Fawn (“Wanda”), and Amy (6 months old) moved to Minneapolis in 1962. Ida-Lorraine was a Cordinator in the Minneapolis Public School System Department of Special Education, as well a Principal of many of the systems’ schools. Ida-Lorraine was a Child Development Specialist in the Greater Minneapolis Daycare Association. Upon retiring from the Minneapolis Public Schools, she practiced as a licensed Clinical Psychologist alongside her husband. She was a Founding Member of the Minneapolis-St. Paul Chapter of the Links, Inc.; a proud Member of the Alpha Kappa Alpha Sorority (AKA); President of both Minnesota and Minneapolis chapters of the Ladies Auxiliary of the Knights of Columbus; Twin Cities Chapter of Jack & Jill; a Board Member of the Friends of the Minneapolis Public Library; Board Member of the Overseers for the St. John’s University School of Theology and Seminary; a Member of the Twin Cities Motorhome Camping Club; a Member of the Board of Catholic Charities of the Archdiocese of St. Paul and Minneapolis. She and her husband Frank were co-Chairs of the Archdiocese Annual Catholic Appeal; a Member of the League of Women Voters; Vice- President of the Urban League; she was long-time Member of the Basilica Choir; a Member of the National Association for the Advancement of Colored People; an experienced notary public and loan signing agent; and a Member of the Parish Council of The Basilica of St. Mary’s Catholic Church. She traveled extensively with her family throughout the USA, Europe, Russia, and Asia, giving talks on child development and education. She is missed by family, friends, and many associates. There will be a visitation Friday, February 22, 2019 4:00 pm - 8:00 pm Estes Funeral Chapel 2201 Plymouth Avenue North Minneapolis, Minnesota 55411 estesfuneralchapel.com The funeral will be Saturday, February 23, 2019 11:00 am The Basilica of Saint Mary 1600 Hennepin Avenue Minneapolis, Minnesota 55403 In lieu of flowers, please consider donating to the Saint Vincent De Paul Shoe and Coat Ministry at The Basilica of Saint Mary https://mybasilica.mary.org/netcommunity/page.aspx? pid=204 or Xavier University of Louisiana http://www2.xula.edu/alumni/howtogive.html

The family of Dr. Ida-Lorraine Jules Wilderson created this Life Tributes page to make it easy to share your memories.

Send flowers to the Wilderson family.