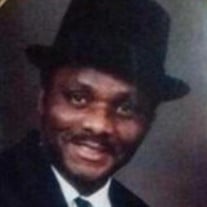 HONORING HIS LIFE MARCH 12th 2021 Wake 10:00am ~ 11:00am Service 11:00am ~ 12:00 Noon MINISTER DAVID L. THOMPSON Sunrise: September 10, 1944 Sunset: February 20, 2021 ESTES FUNERAL CHAPEL 2201 Plymouth Avenue North Minneapolis, MN 55411 OBITUARY Minister David L. Thompson surrendered his soul and went home to his eternal rest on Sunday February 20,, 2021. David L. Thompson was born September 10, 1944 in Harris, Oklahoma to Johnson and Mae Francis Thompson. He was the second oldest of 13 children. He was the greatest mechanic ever. He could just listen to your car and tell you what was wrong with it. He worked at Tyson’s in Oklahoma for many years as a Driver in the early 1970s. He later became a Supervisor over janitorial sites through Task Unlimited in Minnesota in the early 1980s-1990s; then his health started failing. He was a very faithful and loving husband and father. He loved to catch fish and watch westerns on TV. David was saved and sanctified under the leadership of Pastor J B Williams of Full Proof Ministry Church Of God in Christ in Minneapolis, Minnesota. He was an active member of the church attending Sunday School and worship services as his health allowed. He loved to praise the Lord! One of his favorite songs was ‘Children, Go Where I Send Thee’. He was preceded in death by his wife Doris Thompson; parents Johnson and Mae Francis Thompson; four brothers: Alonzo Thompson Sr, Norvell Thompson Sr both of Minnesota, Johnny Thompson and Marvell Thompson Sr both of Oklahoma. Three sisters: Olamae Parker of Spencer, OK, Renell Parker and Barbra Bullard both of Oklahoma City, OK. Minister Thompson leaves to cherish his memory five children. His sons Daniel, Danny Sr, Jonah; daughters Joyce and Christina; four grandchildren Angela, Jasmin, Leeloo, Danny Jr. His two sisters Carol Harmon of Minnesota, Classie Bloomer (husband Billy Bloomer) of Oklahoma City; brother Ronnie Thompson (wife Barbara Thompson) of Oklahoma City; and a host of nieces, nephews and friends.

The family of David Lee Thompson created this Life Tributes page to make it easy to share your memories.

Send flowers to the Thompson family.