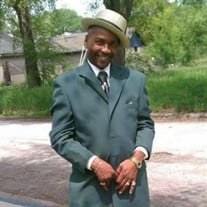 Charles "Chuckie” Manyfield was born on July 12, 1957 in Gary, Indiana to the union of the late J.C. Manyfield and Marvill Thompson Manyfield. He was the seventh child of 12 children. Chuckie attended Douglass Elementary School, Beckman Junior High School and Roosevelt High School (Class of 1976). He moved to Minneapolis, Minnesota in the latter 80’s for better job opportunities. He was emloyed by __PGBC Steel Works as head foreman until he became disabled in 2003. Before Charles became disabled, he was the biggest supporter of his family members endeavors. He would return home for many family events. He loved dancing, music and meeting people. He was a stylish dresser loving his hats and his alligator shoes. He was a loving father and brother. Charles had a very special relationship with his Creator. He would give testimonies about his love and how far his Lord had brought him. Chuckie departed this life after a brief illness on Tuesday, November 3rd, 2020. He was 63 years old. He was preceded in death by his parents, J.C. and Marvill Manyfield; siblings, Clarence Manyfield, Cecil Manyfield, Lawanda Manyfield and Denise Thacker; and nephews, Danron Fillmore and Hanson Thacker. Charles leaves to mourn his passing his wife, JoAnn Manyfield; daughters: Yolanda (Derrick) Bradley-Crocker of Gary Indiana, Miracle Manyfield of Indianapolis, Indiana; son: Monte Manyfield of Indianapolis, Indiana; siblings: Evelyn (Milton) Jackson of Carbon Hill Alabama, Brenda Hill of Douglasville Georgia, John (Gloria) Manyfield of Chicago Illinois, Clyde (Anita) Manyfield of Louisville Kentucky, Calvin Manyfield of Saint Cloud, Minnesota, Rosalind Manyfield of Lavergne, Tennessee and Shanise Russell of Raleigh, North Carolina; thirteen grandchildren and four great grandchildren. He also leaves, special friend, Chuckie Joiner and care givers, Ken and Lucy Kohn, along with a host of nieces, nephews and other relatives and friends.

Charles "Chuckie&#8221; Manyfield was born on July 12, 1957 in Gary, Indiana to the union of the late J.C. Manyfield and Marvill Thompson Manyfield. He was the seventh child of 12 children. Chuckie attended Douglass Elementary School, Beckman... View Obituary & Service Information

The family of Charles Conrad Manyfield created this Life Tributes page to make it easy to share your memories.

Send flowers to the Manyfield family.