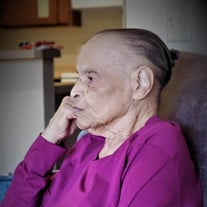 Audrey Juanita House Chatters was born May 24, 1927 in Gary, Indiana to Murry James House and Mildred Celestine House. She departed this life on April 6, 2022 at age 94. Audrey attended school in Hammond, Indiana and graduated from Hammond High School. Audrey then attended one year at the Moody Bible Institute in Chicago, Illinois. While attending her senior prom she met a young man by the name of Aubrey Chatters, who was the guest of another fellow student. Audrey made a lasting impression on Aubrey because 10 years later Audrey came home from church and Aubrey was there. He asked her mother if Audrey was still single. They got married and moved to Gary, Indiana. Audrey worked at what became AT&T for 40 years. She started as a telephone operator and ended up as an engineering clerk. Her job was one with many challenges but she enjoyed working there. She retired in 1991 after her first grandchild was born. Audrey’s husband died on January 4, 2018. They had been married for 61 years. She moved to Tradition Assisted Living in Brooklyn Park, MN on July of 2018 to be closer to immediate family. She lived her almost 95 years in this life with goodness, kindness, and thoughtfulness. She was kind and generous to many in countless ways. From being a friend, to sharing homemade cookies and dill pickles, to hosting Thanksgiving dinners, to chauffeuring relatives and friends, to giving thoughtful gifts, to setting up a home “press-and-curl hair salon”, to helping new moms, to attending dance recitals, to babysitting the grandkids. It was important to her that she was a good person, and that she was. She showed us goodness as she made one person at a time, one deed at a time. She was God’s hands and feet. Audrey is preceded in death by her husband, Aubrey P. Chatters of Gary, IN; parents Murry and Mildred House; brothers Murry J. House, Jr., Tuvin J. House, Gerald Wilbur House; sister Mildred Wilmetta Smith. She leaves to mourn daughter Rachel Chatters Woods (Michael) of Brooklyn Park, MN; son Aubrey Pritchard Chatters II (Carol) of Sterling, IL; grandsons Michael E. Woods, Jr., Aubrey P. Chatters III, and Chandler A. Chatters; granddaughters Melanie E. Woods, and Chelsey A. Chatters; sister-in-law, Julie House; best friend, Bernice Wills; a host of other relatives and friends. In lieu of flowers the family suggests donations be made to a local food shelf.

Audrey Juanita House Chatters was born May 24, 1927 in Gary, Indiana to Murry James House and Mildred Celestine House. She departed this life on April 6, 2022 at age 94. Audrey attended school in Hammond, Indiana and graduated from Hammond... View Obituary & Service Information

The family of Audrey Juanita Chatters created this Life Tributes page to make it easy to share your memories.

Send flowers to the Chatters family.