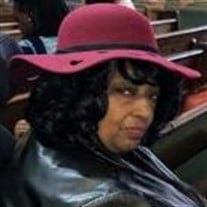 Arlene Bernice Robinson McEwen departed this life on Friday, March 29, 2019 at Hennepin County Medical Center, Minneapolis, Minnesota. Arlene was born on September 20, 1951, the daughter of Herman and Maxine Robinson. She graduated from East High School in Waterloo, Iowa; North Iowa Area Community College, Mason City, and Mankato State University in Minnesota. In 1981, she began her teaching career at Parents in Community Action, (PICA) retiring in 2012. She married the love of her life, Jacob McEwen, on December 17, 1983 in Waterloo. They made Minneapolis their home. Jacob passed on January 4, 2008. At an early age, Arlene accepted Christ as her personal savior and was baptized at Antioch Baptist Church in Waterloo, where she and her family worshipped for many years. Music, teaching, mentoring, and chair dancing were highlights of her life, as well as singing in the youth, mass choirs, and community choirs. With her calm spirit, she encouraged everyone to be their best. During summer breaks, her home was the gathering center for the little children. Upon joining Greater Sabathani, now known as Greater Friendship Missionary Baptist Church, she was active in the music ministry, including the Doves Choir. Arlene is preceded in death by her husband, Jacob; her father, Herman Robinson; brother, Stephen Robinson; and an aunt, Mrs. Helen Baker. All who knew Arlene will cherish her memory. In the Old Testament, Psalm 22:3 declares God inhabits the praises of His people. This is affirmed in the New Testament in II Peter 2:9. As we thank God for the life of Sister Arlene, let us all remember to praise Him, because when we praise God, He shows up! Arlene is survived by her mother, Mrs. Maxine Robinson, her brother, Reginald “Reggie” Robinson, a special sister, Miriam Tyson (Robert), her nephew, Stephan Robinson and his mother Tonya Jean; all of Waterloo. Two nieces: A. Brown and Steja Robinson; Personal Care Assistant and friend Joseph Quarterman; God-daughters Marquita McDavid and Valerie Bolden; God-niece Tanesha Nixon; Sisters-in-Christ Deaconesses Donita Bolden, Wanda Fortune-Stiffin, and Jenell Brown; Rev. Nell Collier; Toni Harris and Delois Lige. She was also precious to the Porter, McEwen, and Wallace Families and a host of other relatives and friends.

The family of Arlene McEwen created this Life Tributes page to make it easy to share your memories.

Send flowers to the McEwen family.